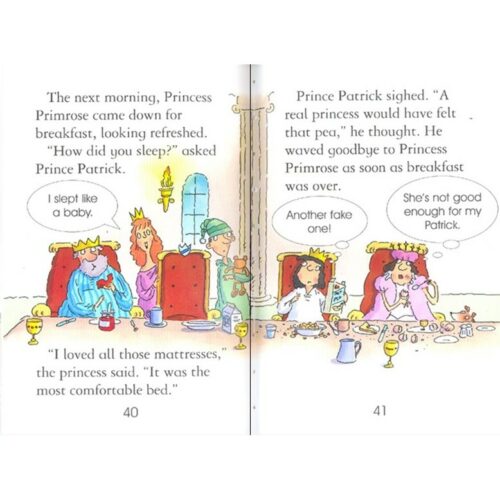 The princess and the pea
Once upon a time there was a prince who wanted to marry a real princess. The next day, the prince went out to find the real princess.The prince’s cousin went on a trip with him.They learned that the maid was hiding in the carriage when they did not go far. She went on a trip together and met the witch a little later.The witch read the book “The real princess test” one person to one and all two numbers to reach and point three very sensitive skin when he got to this number to test the prince to find out about the number to find out about the prince. And she gave her Apple when he came to his castle. Every fake princesses said “he smells”.Later, there was a beautiful princess stepped into the room it was cold outside, because it was raining outside. He said “you can stay in our castle”. There was a one pea the maid was sleepy because she had to clean all the dishes tomorrow. The princess said “I slept very well”and he knew that she was a fake princess.The maid slept in the bed that the princess when the maid woke up the ladder fall down and she couldn’t calm down so she said”help me”. There was something horribly hard in this bed. The King ,Queen and the prince knew that she was the real princess and then they knew a maid but a princess at heart later.They married and live happily ever after.